Along the Arabian Sea, the Indian city of Jamnagar is a money-making machine for Asia’s wealthiest man, Mukesh Ambani, processing crude oil into fuel, plastics and chemicals. It’s also where the billionaire is making his newest bet: a $10 billion investment in green energy.

In a swath of arid land, to the city’s southwest, Ambani’s Reliance Industries, owns the world’s biggest oil refining complex. It’s a sprawling network of plants and pipelines that can process 1.4 million barrels of petroleum a day in an operation covering half the area of Manhattan. In fiscal 2021, Reliance generated about 45 million tons of carbon dioxide emissions from its own operations, which puts the company among the top such emitters in India, according to data on other companies tracked by Bloomberg. Much of that came from its Jamnagar refineries.

Next door, in a nod to a changing — and warming — world Ambani is now building factories that make more environmentally friendly products like solar panels, electrolysers, fuel cells and batteries. On the face of it, the new investment is a sharp pivot for a giant conglomerate whose fortunes have been linked to oil refining for decades. Yet even as Ambani, 64, touts the shift to less polluting options, crude’s byproducts will remain one of the biggest drivers of the $80 billion fortune that’s made him the world’s 12th richest man.

Reliance gets nearly 60% of its $73 billion in annual revenue from its oil-related business, which is so lucrative that it’s attracting other investors. The Middle Eastern energy firm Saudi Aramco is in discussions for the purchase of a roughly 20% stake in Reliance’s refining and chemicals business.

Ambani’s conglomerate is also investing in global expansion projects for the petrochemicals business that’ll last for decades. Even if its new energy operations take off, they will contribute only 10% of Reliance’s total earnings before interest, taxes, depreciation and amortisation by fiscal 2026, while oil-to-chemicals will stay at about 33%, Sanford C. Bernstein analysts estimated in July.

That’s making Jamnagar a location that highlights a broader tension in the energy transition: While the world’s biggest fossil fuel companies are rushing to placate investors — and chase profits — by adding clean power sources, that doesn’t signal a quick retreat from polluting fuels. It’s a contrast playing out even as climate scientists escalate warnings about the fallouts of human-caused global warming. A tanker docked at the Port of Sikka, home to Reliance’s Jamnagar Marine Terminal. India is one of the world’s biggest consumers of oil,and demand is only rising as its middle class buys more vehicles, and consumes more products that are made from petrochemicals. Image: Dhiraj Singh/Bloomberg

M.V. Ramana, an energy policy scholar and professor at University of British Columbia, said it would be hard for Reliance to dissociate from fossil fuel businesses that create emissions.

“If you look at what Reliance’s trajectory has been, it is one of expansion of its fossil fuels business,” Ramana said. Shifting dramatically away from the more polluting oil-to-chemicals business is difficult “because it is going to affect their bottomline,” he said.

Reliance didn’t respond to requests for comment. At its annual shareholders’ meeting in June, Ambani acknowledged the need for change. “The age of fossil fuels, which powered economic growth globally for nearly three centuries, cannot continue much longer. The huge quantities of carbon it has emitted into the environment have endangered life on earth,” he said. Reliance has said it will make its operations carbon neutral by 2035 with the help of projects that offset emissions.

There are also plans to arm the 7 500-acre Jamnagar refinery-and-petrochemicals complex with solar power, green hydrogen and carbon dioxide capture and usage technologies. To curb pollution, about 2 200 acres of land within the facility have been converted into a green pasture, growing mangoes, guavas and medicinal plants.

The site’s scope is so vast that it’s rubbed off on the city’s economy. The facility stands near miles of salt pans, its stacks towering over the low-rise houses in surrounding villages. Reliance’s logo is seen at the airport, on the numerous gas stations it operates, malls and the banners of its telephone service Jio. Jamnagar now has multi-storeyed apartments and luxury cars running on its roads. 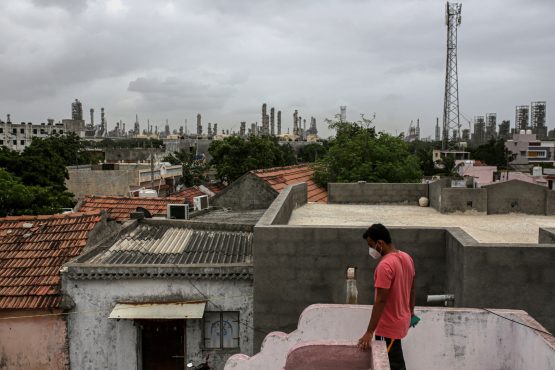 The refinery towers over the rooftops of nearby villages. There are plans solar power, green hydrogen and carbon dioxide capture and usage technologies. Image: Dhiraj Singh/Bloomberg

The Ambani firm has over the last 10 years invested about $15 billion to boost profits from its legacy oil refining and petrochemicals businesses, including $4 billion to convert petroleum coke — one of the dirtiest refinery by-products — into gas needed to power the massive Jamnagar complex.

It’s also said it will spend $6 billion ramping up natural gas production from the depths of the sea along with joint venture partner BP Plc. In addition, the Reliance-BP joint venture is adding more fuel stations. BP didn’t respond to a request for comment.

Reliance’s Scope 1 carbon dioxide emissions — those caused directly by a company’s operations — surged 60% in the year ended March 2020 to 47.5 million tons, mainly because it started using petcoke produced from the refineries internally, instead of selling it to customers outside, according to the company’s latest annual report. A year later, emissions came down to 45 million tons.

India is one of the world’s biggest consumers of oil, and demand is only rising as its middle class buys more vehicles, and consumes more products like plastic bottles and paint that are made from petrochemicals. Many Indian cities, including capital New Delhi, are among the world’s most polluted. Prime Minister Narendra Modi has launched a national clean air program. Reliance earned a net profit of $7.2 billion) in the year ended March, the most by any Indian company. Image: Dhiraj Singh/Bloomberg

The new Reliance green venture will be spread over 5 000 acres of land. Ambani has said a key focus will be to create products for producing solar power, an area where India has long lagged China.

“When companies of this size announce such ambitious plans, it gives a great fillip to the decarbonisation goals of the nations and the world at large,” said Shantanu Jaiswal, head of India at BloombergNEF.

Still, moving away from polluting fossil fuels for economic reasons is hard not just for Reliance, but for the nation as a whole. India has insisted that developed nations take larger initial steps to cut emissions so that poorer nations don’t feel the economic strain.

The Jamnagar refinery has spawned a whole generation of entrepreneurs. “The billions of dollars Reliance has invested has significantly boosted the local economy,” said Chandrsinh Ramsinh Jadeja, 52, who developed a business doing construction work for Reliance in Jamnagar. “Farmers earned money, sent their kids to school and purchased land elsewhere, tens of thousands of jobs were created.” The Reliance Mall in Jamnagar. Reliance has said it will make its operations carbon neutral by 2035 with the help of projects that offset emissions. Image: Dhiraj Singh/Bloomberg

Ambani has in recent years expanded into retail and built his digital business with investments from big names like Facebook Inc. The mammoth Aramco deal under discussion showed how important the oil-to-chemicals enterprise remains to his future. In 2019, Ambani estimated that such a deal would lock in about half-a-million barrels a day of Saudi crude for processing at Reliance’s refineries.

The latest news about the deal boosted the company’s shares by as much as 2.7% and Ambani’s net worth by more than $1 billion.

“Reliance’s diversification into green energy is a starting point, it’s a welcome shift. But the business is evolving,” said Kanika Chawla, programme manager for UN-Energy,  which leads inter-agency collaboration on sustainable energy. “It’s not a change in regime.”

We use cookies on our website to give you the most relevant experience by remembering your preferences and repeat visits. By clicking “Accept All”, you consent to the use of ALL the cookies. However, you may visit "Cookie Settings" to provide a controlled consent.
Cookie SettingsAccept All
Manage consent

This website uses cookies to improve your experience while you navigate through the website. Out of these, the cookies that are categorized as necessary are stored on your browser as they are essential for the working of basic functionalities of the website. We also use third-party cookies that help us analyze and understand how you use this website. These cookies will be stored in your browser only with your consent. You also have the option to opt-out of these cookies. But opting out of some of these cookies may affect your browsing experience.
Necessary Always Enabled
Necessary cookies are absolutely essential for the website to function properly. These cookies ensure basic functionalities and security features of the website, anonymously.
Functional
Functional cookies help to perform certain functionalities like sharing the content of the website on social media platforms, collect feedbacks, and other third-party features.
Performance
Performance cookies are used to understand and analyze the key performance indexes of the website which helps in delivering a better user experience for the visitors.
Analytics
Analytical cookies are used to understand how visitors interact with the website. These cookies help provide information on metrics the number of visitors, bounce rate, traffic source, etc.
Advertisement
Advertisement cookies are used to provide visitors with relevant ads and marketing campaigns. These cookies track visitors across websites and collect information to provide customized ads.
Others
Other uncategorized cookies are those that are being analyzed and have not been classified into a category as yet.
SAVE & ACCEPT
Follow